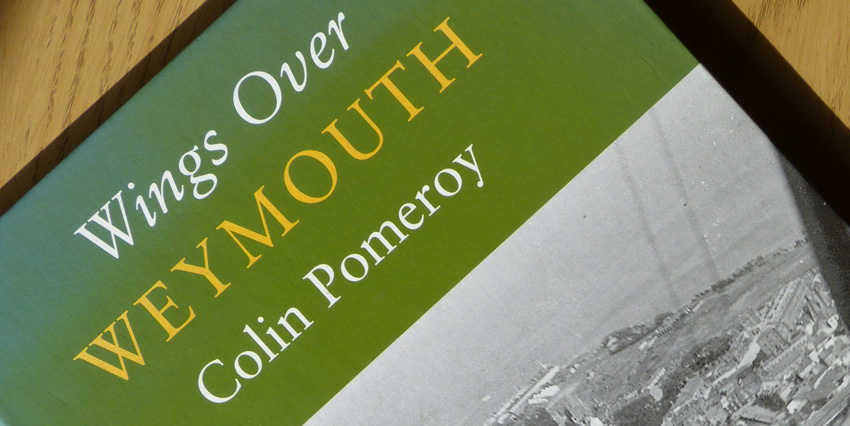 This slim volume presents an immediate visual clue as to the aviation history of Weymouth – there isn’t a lot of it. No surprise, really, as there have never been any major airfields in the area.

That said, Colin Pomeroy’s book opens and closes with Weymouth’s role in two minor landmarks in aviation history. The first took place on 9 May 1912 when Lieutenant Charles Samson RN made a historic flight from HMS Hibernia to Lodmoor. It was the first time an aircraft had taken off from a vessel that was under way.

The second historical footnote occurred on 29 September 1931 in the Solent. Here a young RAF pilot, George Stainforth, set a new airspeed record by flying at a speed of 407 mph. It was the third time that Stainforth, an ex-pupil of Weymouth College, held this world record.

Pomeroy’s  book provides detailed descriptions of both these incidents, as part of Weymouth’s story of aviation exploits. These began as far back as ballooning over  the town in the 1840s and continue through to the 2003, when Concorde flew over the town on one of its final flights before the supersonic fleet was retired.

Historians of the area will be interested to learn of Weymouth’s two airfields, first at Lodmoor and then Chickerell. RAF Chickerell, as it become, continued in light operation until the late 1950s.

Activities on the Chesil Bank Bombing Ranges are described in the book, including details of all the aircraft accidents in the area from 1907 to 1983.

As with many history local history books, old photographs provide fascinating glimpses into the past. Pomeroy includes a good number, unsurprisingly all in black and white.

One that caught my eye was a shot of three biplanes flying over Wyke Regis in 1938. The high quality image captures not only the aircraft, but also the area around Portland Road, from today’s Sunnyside Road down to Ferry Bridge. It’s a wonderful reminder of how the area used to look before many of today’s homes were built.

Sadly for me, this book was borrowed from the local library, to which it must be returned. It’s another volume that I’d like to add to my own local history collection when I come across a copy.

Get Social with us